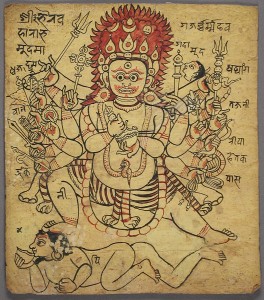 Bhairava (भैरव) commonly refers to the fierce, wandering form of the otherwise peaceful, focused Śiva. Because of his complete ability to assert his will, Bhairava is seen as the angry manifestation of Śiva and is commonly associated with annihilation. He is not angry for the sake of being angry, but rather for that of protection, especially protection of the timid.

Bhairava’s fierceness can remove negativity. His power is strong enough to deal with any weaknesses. Bhairava is so fierce that he can also take away sins. Therefore, people take alcohol, meat, and other toxic things as Prasad (offerings) to Bhairava’s temple.1

Bhairava takes care of what needs to be taken care of. He is the divine which rights wrongs, is efficient, and shakes off all tamasic darkness and dead weight. In fact, Śani (Saturn) worships Śiva and is a particular devotee of Bhairava. He is a “heavy-duty” awakener, a Guru.

Besides being the source of life, Bhairava is the teacher of esoteric wisdom. He appears as the voice of intuitive wisdom, the inner instinct which knows which step to take on the path of “waking up.” He is the inner guru, the teacher who lifetime-after-lifetime guides you on the path that leads you to this moment when you wake up once and for all. He is subtle, revelatory speech channeled through the minds of sages, has over thousands of years, given us many texts that are called “Āgamas,” which arise directly from Śiva’s Bhairava consciousness. Many take the form of dialogs (like Abhinavagupta), conversations with Śiva’s consort, Devi/Sakti, his inseparable other half, heard by sages in deep meditation.2

The name itself translates as “terrible” or “frightful.” It has come to mean frightening, formidable or terrifying. However, each syllable contains in itself a specific meaning and outcome.

He is often referred to as Kāla Bhairava, Bhairava’s chief form. As “Kāla” means “time,” he is the supreme Lord of time. He is the masculine form of the same name of the goddess, Kālī, who is the fierce, active form of Devi.

Bhairavi is the fifth of the ten Mahāvidyā (Great Wisdoms) and an aspect of Devi, or Adi Parashakti. As the feminine form of Bhairava and his consort, she is the fierce, terrifying form of the goddess, Devi, and is practically indistinguishable from Kālī.

Kālī is the fierce form of the goddess, just as Bhairava (Kāla) is the fierce form of Śiva. However, as it is the goddess, the feminine, that embodies the Śakti, or power, from which ourselves and the universe operates, it is Kālī who churns the oceans. Kāla Bhairava is the fierce masculine energy that counterbalances Ma Kālī’s powerful actions of destruction, change, and transformation and protects us from the poisons which manifest as a result of Kālī’s powerful karma. As Śiva is the grounding upon which Śakti acts, Kāla Bhairava matches Kālī’s fury, maintaining stability, focus, and forward direction while defeating negativity through the negative or insecure, turbulent periods of transformative, uncertain, or revolutionary change.

The Dog of Bhairava

Bhairava is often depicted wearing snakes and has a black dog as his Vahana (divine vehicle). People sometimes mistake his image for Śani’s when accompanied by a black dog, as Śani is also depicted with a black dog.

Feeding stray dogs on a daily basis or as often as possible and keeping black dogs begets blessings from Bhairava. This is also a good remedial measure for Rāhu afflictions. Do not harm any animal. 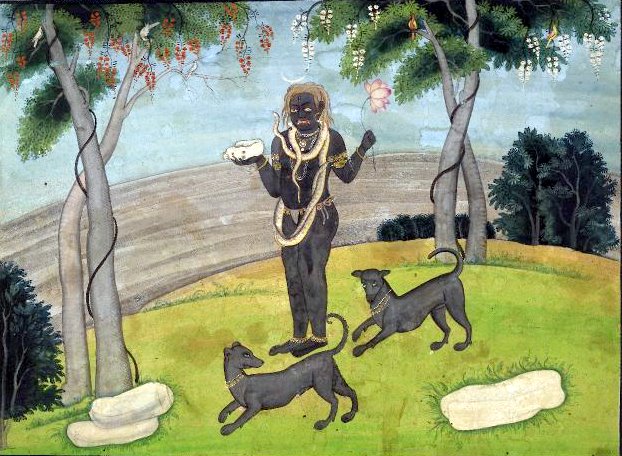 There are many similarities between Rāhu and Bhairava.3

Kāla Bhairava is the presiding deity of Rāhu.

Rāhu’s chariot is pulled by eight horses, which correspond to the eight forms of Bhairava.

Kāla Bhairava japa (particularly the Kāla Bhairavashtakam) is a powerful remedy for those afflicted by Rāhu.

Here are four of the various versions of the mantra: