Phalguṇī means the “fruit of the tree,” and Pūrva represents the prior, or eastern half of the two Phalguṇī nakṣatra (the other being Uttara Phalguṇī). Pūrva Phalguṇī (पूर्व फाल्गुनी) is referred to as “the former reddish one” and Pubbha. It’s symbolized by a fig tree, a fireplace, a swinging hammock, a couch, a platform, a bed, or the two front legs of a bed. The other two legs of this resting platform reside in neighboring Uttara Phalguṇī.

Like a bed, a hammock symbolizes rest, relaxation, and enjoyment. This reflects the Pūrva Phalguṇī native’s tendency to be carefree, disinclined to worry, and reliance on luck. Stress is not on the books at all for such a person, leading to good health and low stress by their ability to live in the present. However, such calmness fosters impetuousness and a lack of forethought and planning, potentially affecting one’s preparedness. The inertia of the hammock reflects the inability to remain in motion or motivated for very long. If a person is not comfortable with a relaxing lifestyle, this lack of motion may manifest in a person as an ongoing craving for stimulation.1

Although connotations of laziness may be assumed here, one should understand that rest is required, a necessary activity that allows us to move on to the next daunting task in our hectic material lives. We need to heal and be revitalized. Pūrva Phalguṇī does this. 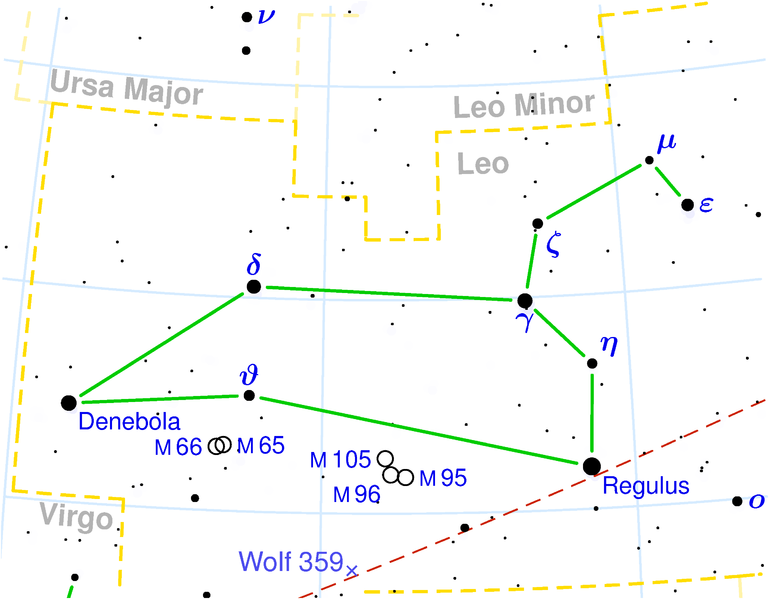 Zosma (δ Leonis) also goes by the names Zozma and Duhr. The name Zosma means “girdle” in ancient Greek, referring to the star’s location in its constellation, on the hip of the lion. Based upon parallax measurements, it lies at a distance of about 58.4 light-years from the Earth.2

Chertan (θ Leonis) also goes by the names Chort and Coxa. Chertan is derived from the Arabic name al-kharātān, which means “two small ribs.” Chertan originally referred to both δ and θ Leonis. With an apparent visual magnitude of +3.324 it is visible to the naked eye and forms one of the brighter stars in the constellation. The distance from Earth can be directly determined from parallax measurements, yielding a value of about 165 light-years.3

Uttara Phalguni and Pūrvā Phalguni, together, consist of the four stars which are represented by the four legs of their symbolic bed.

As Kama is the main motivation here, the passion is for children, creativity, enjoying life, friends, and family. (see more: Komilla Sutton. The Nakshatras. p. 117.)

Although its primary motivation being Kama (desire), Pūrva Phalguṇī desires in a primarily tamasic, inert manner (hence, the hammock).

Śūkra offers Pūrva Phalguṇī great wealth and gifts in the fine arts. A youthful, carefree, exuberant nature with an incredible zest for life can be experienced through Pūrva Phalguṇī. Sensual pleasure, passion, and love and affection are also often found in this asterism. Śūkra offers fulfillment, good luck, and well-being. Śūkra, in its tamasic tendency, also offers healing and revitalizing pleasure.

The Śūkra/Sūrya combination of energy bolsters this revitalization and produces an attractive, virile person who has the ability to influence others and deal sweetly with people.

Bhaga is used as a term to mean “lord” or “patron,” as well as “wealth” or “prosperity” and is derived from the Sanskrit root bhaj, to divide, share, or worship. Bhaga is the fourth son of Aditi, the mother of the gods. Just as his mane implies, Bhaga is the god of good fortune and prosperity. He protects and maintains marital happiness and wealth and bestows family inheritance. The duty of a lord (from Old English hlaford, or “bread-warden”) is to share and distribute the collective riches or bounties among his followers. Interestingly, in Slavic languages the equivalent of Bhaga is bogъ.

Bhaga is the Vedic God of Bliss and is a form of divinity that actively apportions celestial treasures that manifest as love and prosperity for all living beings. With Uttara Phalguni’s deity, Aryaman, Bhaga bestows riches, affluence, and material prosperity. If Pūrva Phalguṇī has a strong and beneficial effect on you and you’re currently looking to renounce the material, don’t bother. Your current incarnation may require you to go ahead and enjoy it (and there’s nothing wrong with that). This not only includes everyday material success, but Bhaga also ensures victory over adversaries (at least according to the Vedas).

Virabhadra, a powerful hero created by Shiva, once blinded Bhaga.

Coupled with Pūrva Phalguṇī’s restful nature, Bhaga bestows love, affection between the sexes, sexual passion, and pleasure, allowing for the enjoyment of intimacy in a restful environment.

Bhaga desired, “May I partake of the best portion of the Gods.” One who makes the appropriate offering to Bhaga, to the Phalgunis, gains the best portion among his peers. – David Frawley, Fruits of Worshipping Each Nakshatra

In the Rgveda, the personification of Bhaga is attested primarily in verse 7.41, which is devoted to the praise of the Bhaga and of the deities closest to him, and in which the Bhaga is invoked about 60 times, together with Agni, Indra, the dual Mitra-Varuna, the two Ashvins, Pusan, Brahmanaspati, Soma and Rudra. The Bhaga is also invoked elsewhere in the company of Indra, Varuna and Mitra (e.g. RV 10.35, 42.396). The personification is occasionally intentionally ambiguous, as in RV 5.46 where men are portrayed as requesting the Bhaga to share in bhaga. In the Rigveda, the Bhaga is occasionally associated with the sun: in RV 1.123, the Dawn (Ushas) is said to be the Bhaga’s sister, and in RV 1.136, the Bhaga’s eye is adorned with rays. The 5th/6th-century BCE Nirukta (Nir. 12.13) describes Bhaga as the god of the morning. In the Rigveda, the Bhaga is named as one of the Adityas, the seven (or eight) celestial sons of Aditi, the Rigvedic mother of the gods. In the medieval Bhagavata Purana, the Bhaga reappears with the Puranic Adityas, which are by then twelve solar gods.4

I am the Āditya, Bhaga, lord of good fortune. I am the best that life has to offer. I am the sweetest, juiciest, most adorable, most precious, tastiest, most indulgent, most delectable, most sensational person in your life. I am the finest, most perfect, most delicious fruit. The most exquisite beauty, without peer, without competition. Indulge your senses with me.

Śiva began his marriage procession under Śūkra-ruled Pūrva Phalguṇī, and so Liṅgaṃ is also symbolic of the nakṣatra. Śiva is considered by some an alternate presiding deva to Pūrva Phalguṇī (beside Bhaga) for this reason. Śiva Liṅgaṃ adds a spiritual dimension, endowing creative action with sacred meaning. This appears when Pūrva Phalguṇī is well-placed (i.e., in a Kendra or Kona) or when a beneficial planet resides in it. An understanding of the process of creation allows for involvement in the arts. It is traditionally said to promote fame, renown, and the acquisition of wealth through personal merit or charisma.5

Pūrva Phalguṇī gives the power of creation and procreation, of creative procreation (prajanana shakti), and brings about union and procreation on all levels. Yet this follows some official agreement or marriage and is part of the creation of a new family or social order. Its ruler, Bhaga, the God of contracts and unions, governs such productive alliances and also arranges the marriage festival.6

Those with strong placements should practice Dāna and Dayā. “Natives may crave stimulation, sensual excitement, and change and exhibit an impulsive and disturbed mind. A promiscuous nature with an addictive personality may result. A showy image that reflects arrogance and pride can be seen here. These people must learn to control their sensory attachments and cultivate generosity, humility, kindness, and loyalty to those close to them.”7

There is a vargotamma and pushkara pada. The Sun, Moon, and Venus become debilitated, Saturn and Mercury are exalted.

Because of the strong association with creativity, an understanding of the process of creation, and Śūkra’s rulership, music, acting, and the arts in general are related to this nakṣatra, as well as entertainment, especially theater, film, and classical music.

Professions connected with marriage or weddings, to include planners, counselors, and therapists are common due to its power of procreation, prajanana shakti and its ruler, Bhaga, the God of contracts and unions which governs such productive alliances and also arranges the marriage festival.

As with all nakṣatram, there are both auspicious and inauspicious characteristics to be considered.

Pūrva Phalguṇī is indicative of the lips, reproductive organs, and the right hand.9

Health will generally be good, at least in terms of permanency, especially for men, but there may be a proneness to dental disease, abdomen issues, and diabetes. Women may suffer from frequent menstrual issues, jaundice, or asthma or breathing problems. ((https://vedictime.com/en/library/nakshatra/pphalguni))